Besides the conventional Scruggsrolls there are many other rolls you can play. Add some nice variations to your playing by stepping off the beaten path! But, I advise you strongly to become acquainted with the Scruggsstyle first, before you try these 'alternative' rolls. Keep in mind that the Scruggsstyle is a solid and very functional platform on which you can build other techniques. So practice your rolls and the licks that have made the fivestringbanjo famous in the world folk and beyond!

Playing a roll on three strings
Our first variation is based on a familiar roll: the forward-backward. This roll is normally played on four strings: the third, second, first, fifth (which creates the 'forwardmovement') and then the first, second, third and first (creating a 'backwardmovement'). This variation has no fifth string. The roll is played the same way as the conventional forward-backward, with the same fingering positions for thumb-, index- and middlefinger. It’s not a difficult to play variation; in fact, the fifth string has been left out and you’re playing the third string as a substitute ( look at picture 1). This TFR (three finger roll) can be used in a break, but is also very effective in backup.
Playing a roll on three strings

The same roll with a C- and D-chord.

The workshop in progress 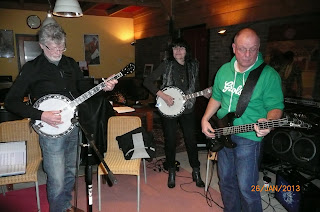 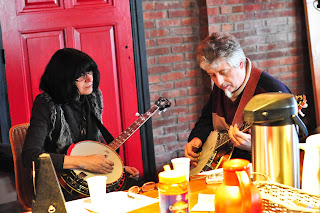 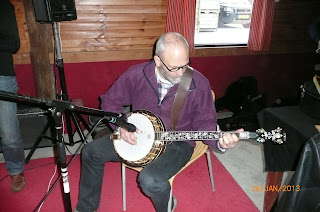 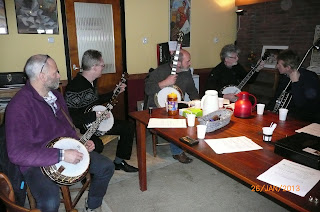 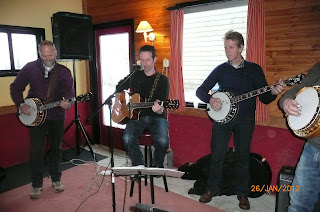 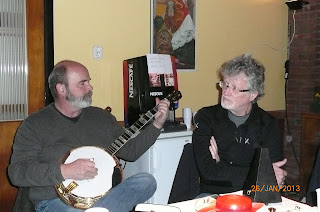 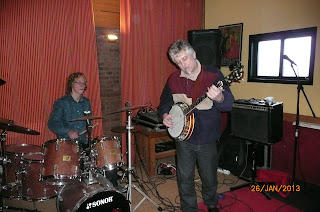 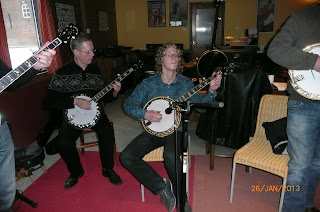 Last saturday a bunch of enthusiastic players gathered for a banjoworkshop. One of the primary goals was to let the students work instead of watching me talking all the time... I’ve seen a lot of workshops with students listening to the ‘teacher’ during the entire time, with their banjo’s on their knees. This is not my idea of a workshop!
A year ago I met Jens Kruger in Solingen, Germany. He gave a workshop and he put the ‘work’ in the ‘shop’ (literally, because the workshop took place in a musicshop). He showed me how it’s done: creating a balance between practicing and listening.
The students did some metronome excercises and learned how the find the G-scale (and other scales) on the fretboard with a simple formula. In the afternoon my friends from the Big Americana Band (in which I play) joined us. The students had the opportunity the play with a live band and they loved it! 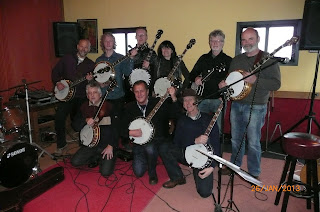 The headline of this article sould be ‘A well prepeared musician’, but since we’re talking banjo’s (and harmonica’s) here, I will let it be. There are a number of things you should carry along in your banjo-case.

*A set of new strings (or two sets...)
*A spare set of fingerpicks (also a thumbpick, but a thumb is also a finger...)
*Cloth (to wipe your banjo dry or clean)
*A spare tuner
*A spare capo
*A cable cutter tool (pliers) to cut the ‘left-over’of a new string
*Some allen wrenches
*A little screw driver (for adjusting the pressure of your tuners)

These things come in very handy. It’s like driving a car with oil, water, a spare tire and tools in the back. This list is not complete; maybe you have some other things that might come in handy. Please let me know!
Gepost door Fred Hissink op 14:09 Geen opmerkingen:

A nice song for harmonica; imitating a train...

Playing in a band

Okay, the real stuff! Let’s assume that you are about to join a band. A bluegrassband, a countryband or another kind of band, it doesn’t matter. What does matter are a few simple facts (I call them ‘rules of politement’) to make your musical contribution a pleasure for the band, yourself and the audience.
Bandmembers (you...) are part of a band, not the centre of the band. Together they make music and members are taking turns to play a break. This means that you are playing in the background for most of the time (see my article ‘Playing back-up: working in the background’).
Always think of the band as a music producing unit and think of the contribution you can make to the overall sound. It’s important to listen to each other while you are playing, rather than ‘pushing’ your own sound forwards. Of course, your contribution is a part of the band, but it should not interfere with the musical part of another bandmember. This is especially true when you are playing in the background. It should be obvious who is doing what at in a specifiek part of a song.
Sometimes it’s good idea to step aside and listen what is going on in your band. Don’t play your instrument, just listen...

The ‘empty’ parts at the end of a line (before the singer goes the next line) are perfect for so called fill-in licks. One instrument can make a contribution here, but not all the instrument at once! I’ll give you an example: in our band, called the Big Americana Band (BAB), I play banjo and harmonica(‘s). We play a song called Mystery Train and I start the song by imitating a train on my harp. I play fill-in licks in the rest of the song (trainsounds). One evening, while working on this song, I noticed that our fiddleplayer also did a very good imatation of a trainwissle. So we decided to take turns to play the train-whistle as a fill-in lick.

Playing a break or not?

It’s not a must to play a break in every song. Sometimes a banjo can be more effective as a backup-instrument, giving the right sound on the right moments in the background. Also the band can start a song with a banjo-intro. Banjo and fiddle together can make a nice intro too.
Anyway, be creatieve. Poor your own musical sauce over the songs and be distinctive. 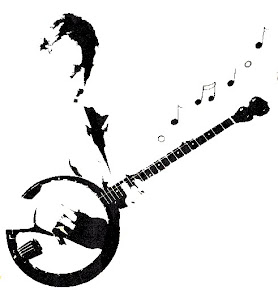 Do you want to play fivestring (resonator) banjo or diatonic harmonica? I can show you the way, but be prepeared to invest some time and energy; without these two key components progress will be hard to achieve... believe it or not, but teaching with the aid of Skype has proved to be a good alternative; I have students who come to my house, but also students from the other end of the country. Interested? Send me an e-mail.

Fred Hissink
Laag Soeren, Gelderland, Netherlands
Trains........... I've been interested in Dutch dieseltrains since I was a kid. I watched them manoeuvre and never really understood why they made these movements... Their roaring engines impressed me and they still do, more than 35 years later. I'm working on a Dutch railway-emplacement with dieseltrains from the series 2200/2300 and 2400/2500. Music........... Bluegrassmusic or folkmusic in general has been an interest since I was a kid. I listened to the countrymusic-programms on the Dutch radio and jumped for joy everytime I heard a fivestring-banjo! At this point in time I’m playing in Americana Unlimited (see website). Americana. I'm playing an 1978 Ome Triple X-banjo, squareneck resonatorguitar and several harmonica’s (Hohner and Seydel). I’m teaching others how to play a fivestring banjo and diatonic harmonica. 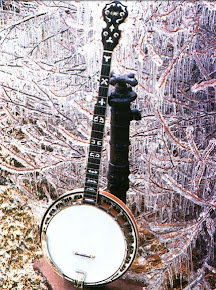 I play a 1975 Ome Triple X-banjo. It has a beautiful warm sound.. This instrument features a handshaped neck made of fine South American mahogany. The mother-of-pearl inlay work is offset by the African ebony fingerboard, peghead overlay and heel cap. All hardware on this instrument is very heavily nickelplated. The resonator has two concentric purfling rings inlaid into the back and the resonator and fingerboard are bound in simulated grained ivory. 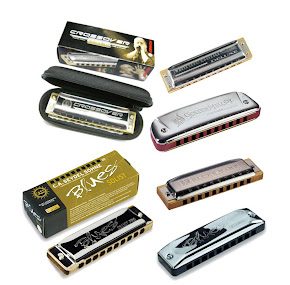 I use several harps for different songs and occassions. I prefer the Seydel Solist Pro when I have to play fast songs. I play the Marine Bands (Deluxe and Crossover) for bluesy songs or songs that need a bluesy touch. I also use these harmonicas in bluegrass. I use Golden Melodys for rock- or popsongs and Blues Harps (Hohner Blues Harps – the name Blues Harp is very commonly used for several kinds of diatonic harmonicas) for jamming and teaching.